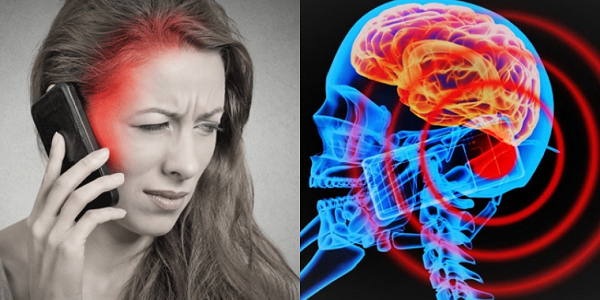 Casual use of a cell phone can damage the DNA in sensitive areas of the brain and the levels at which damage occurs can be as low as .024-.0024 W/kg – much lower than any cell phone. DNA damage from EMF exposure is cumulative, thus increasing your risk each time you use your phone.

Man-made electromagnetic and radio frequencies (EMFs/RFs) produce chaotic energy of a different frequency than natural EMFs which can be hazardous to human DNA.  Man-made EMF’s may distort human energy patterns and may cause cancer or present other grave dangers to human health. In addition, man-made EMFs can disrupt or distort organic energy patterns.

Electromagnetic Field radiation (EMF) is emitted from your cell phone and all electronic devices, and as such, it can disrupt cells. But how serious is this disruption, and what effects can be seen from it?

This bioelectrical interference, as well as other concerns (e.g. correlation between cancer and power lines) has led to many types of research on just exactly what kind of harmful effects EMFs from electronic devices have on the cells in our bodies.

A cell is built to protect the DNA, RNA, and protein macromolecules inside it.

However, every cell experiences threats, in the form of both intrinsic conflicts and external oxidants, toxins, and heat. These can compromise the integrity of its genome and proteome. When this happens, the cell can go into a cellular stress response, which is a big domino effect!

In August 2009, a paper by Columbia University described how EMFs activate a cellular stress response. EMFs can penetrate a cell’s nucleus and interact with its DNA, bypassing a cell’s defense mechanisms.

According to studies, they can do this by generating reactive oxygen species (ROS) upon entrance into the cell. ROS are not bad, and are involved in many different cellular functions. However, too much ROS can become toxic to maintaining homeostasis in the cell by changing enzyme activity and gene expression (which is linked to many diseases). It is also responsible for peroxidation of membrane phospholipids. The cell has anti-oxidative mechanisms that can alleviate the damage caused by ROS and protect the cell membrane.

However, EMFs cause an overproduction of ROS, which impairs these defense mechanisms and creates excessive free radicals, or oxidants. Excessive amounts can lead to cancers, necrosis (neuron death) and neuronal damage in brain tissue, as well as neurological disorders like Alzheimer’s, spinal injury, multiple sclerosis, and epilepsy. Since the brain has such a high metabolic rate, ROS and oxidative damage can happen easier than in other organs. 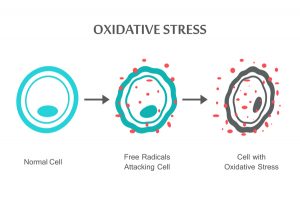 Long story short, EMFs create an imbalance between ROS and antioxidants to get through the membrane into the nucleus. It interacts with and causes specific breaks in DNA strands, and this results in oxidative stress and a cellular stress response.

All living things generate stress proteins to survive environmental stressors. At first, it was thought that only “heat shock” could cause a cellular stress response, hence why the stress response proteins are called hsp (heat shock proteins). However, many other stimuli, like pH, osmotic pressure changes, alcohol, toxic metal ions, and EMFs were discovered to activate hsp synthesis. EMF induction of increased levels of hsp70 happens within five minutes, and can happen at levels of energy input 14 times lower than the energy needed to create a thermal response.

These stress proteins help chaperone the cells, and repair and refold damaged proteins by transporting them across membranes. This synthesis is an adaptation of cellular stress proteins before preparing the cell for an appropriate environmental change, which will influence overall stress tolerance.

How EMFs Cause Oxidative Damage in a Cell:

A paper by Professor Tom Butler from University College Cork in Ireland claimed that: “there is substantial evidence that oxidative damage to cellular proteins, lipids and DNA is at the root cause of many of the ill-effects of microwave RFR.”

In addition, a research paper states: “Oxidative damage to cellular DNA can lead to mutations and may, therefore, play an important role in the initiation and progression of multistage carcinogenesis…Elevated levels of ROS and down regulation of ROS scavengers and antioxidant enzymes are associated with various human diseases including various cancers. ROS are also implicated in diabetes and neurodegenerative diseases.”

The authors of the Columbia University paper concluded that for the protection of living cells, EMF safety limits must be changed from their current standard, which presently only specify protection against thermal effects. 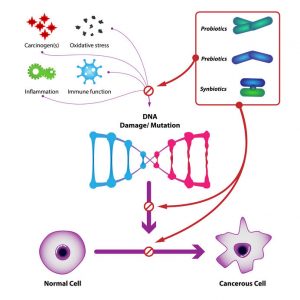 Another effect of EMFs interaction with our cells is the increase of calcium ions in our cells. More than 20 years ago, a study found that EMF exposure could produce changes in calcium signaling in the membranes surrounding each of our cells.

It is voltage-gated because EMFs can force the voltage sensor (which detects electrical changes) to open the gate to the cell membrane, immediately allowing a ton of calcium ions, called intracellular Ca2+, into the cells. The sensor is extraordinarily sensitive to the electrical forces from EMFs, which are about 7 million times stronger than the forces on singly-charged groups elsewhere in the cell.

Why is extra intracellular calcium bad?

It may lead to multiple regulatory responses, including increased nitric oxide levels (NO) and superoxide levels.

Why is this bad?

Well, nitric oxide has some beneficial health effects, like stimulating bone growth coupled with increased calcium. But too much of it will make it react with superoxide to form peroxynitrite. This is a big-time potent non-radical oxidant, which breaks down to form many different free radicals. Excessive free radicals, as we know, create oxidative and nitrosative stress, which can damage the cell and lead to many chronic diseases.

Autism has been connected with excessive amounts of intercellular calcium. Many studies have predicted that the correlation between EMF exposure and Autism could be due to the increased calcium signaling pathways EMFs cause.

While these EMFs are weak, the amount of electrical force they put on the highly-sensitive voltage sensor causes a vast increase of calcium ions in the cell, which can lead to many impactful biological changes. This happens in humans, animals, and plant cells as a universal mechanism.

Other Impacts on the Cell

A Hungarian study in 2000 showed cellular responses to various forms of radiation, including EMFs. Several reversible alterations occurred in the structure of cell organelles. Many permanent changes, including morphological signals associated with cell death, were also triggered.

In 2005, an Italian independent paper corroborated the Hungarian findings. Non-thermal EMF in the cell phone frequency was shown to induce apoptosis or programmed cell death in human recombinant cells. In the paper, signs of radiation-induced damage included changes in the organization of the cell membranes. Perturbations in the composition of the cell or different membrane domains, including enzymes and binding sites.

Virtually every important sub-unit, including the mitochondria, endoplasmic reticulum, Golgi complex, and lysosome system were affected in some way by EMF exposure. Morphological changes in the appearance of the cell, as viewed through electron microscope, revealed chromosomal aberrations. It is believed that this is the result of radiation causing DNA or damage to proteins in the nucleus or “brain” of the cell. Counter arguments were given that the damage done was not permanent and only part of a stress response.

Why Does All This Matter?

Our bodies are not without defense mechanisms. If our body experiences a small amount of damage, we can usually cope. Occasional breaks in DNA are actually normal and can happen through routine exposure to the environment, such as from UV radiation from the sun.

However, if we receive too much damage, it may become difficult for our body’s defenses to cope with overwhelming problems. Thus, permanent changes to a cell which goes unfixed can lead to many diseases, including cancer.

According to the CDC, studies have shown that “workers exposed to high [electromagnetic] fields have increased cancer rates.”

In the case of cancer, a damaged cell is not fixed or destroyed, instead it proliferates out of control and becomes a tumor or growth.

Because the human body is a delicate electrical machine made of millions of cells, small perturbations through the dangers of cell phones and other EMF exposure can have harmful consequences down the road. More correlation studies undoubtedly will be done as EMFs take more and more of a central position in our lives.

How to Stay Safe

While the jury is still out, it is extremely important to play it safe and defend yourself from unnecessary EMF radiation exposure. You should stay mindful of any toxin or stressor that creates excessive oxidative stress, since it can lead to a host of biological problems.

In 2009, the European Environment Agency put out a review entitled “Late Lessons from Early Warnings: Towards realism and precaution with EMF?”  In the paper, the public is urged to help participate in risk analysis as our scientific body of knowledge on EMF is still growing. As the paper title would imply, it is important to take reasonable precautions, where lack of conclusive information is still being found.

Below are some easy things you can do to lessen the impact EMF radiation has on your body and cells:

ORIGINAL ARTICLE CAN BE FOUND HERE

Suson Essentials and its employees/contractors are not doctors or qualified health care professionals. The information contained within are the opinions of Suson Essentials et al., based on extensive research and personal experience unless otherwise stated, and should not be substituted for qualified medical advice. Health related information is in no way intended to diagnose, prevent, treat or cure any medical or other condition. Always seek the counsel of a qualified medical practitioner or other health care provider for an individual consultation before making any significant changes to your diet and lifestyle, or before taking any herbs, supplements or using essential oils. Also seek a qualified health care professional to answer questions about specific medical conditions. If you require a referral, Suson Essentials is delighted to refer a magnificent health practitioner to you! Just ask us! Thank you!

AND WE WILL SEND YOU YOUR OWN DISCOUNT VICTOR DESK CODE.

AND WE WILL SEND YOU YOUR OWN DISCOUNT BAUD CODE.

AND WE WILL SEND YOU TO YOUR OWN PROPUR PORTAL.

AND WE WILL SEND YOU A DISCOUNT CODE FOR TRANSCENDENTAL MEDITATION TODAY.

YOUR CHECKOUT CODE IS “SUSON ESSENTIALS”

AND WE WILL SEND YOU YOUR OWN DISCOUNT MIRACLE NOODLE CODE.

I do not wish to submit my info. Take me to Miracle Noodle.

Click the button to go to VICTOR Standing Desks!

Click the button to go to your own dōTERRA Portal!

TAKE ME TO dōTERRA

AND WE WILL SEND YOU TO YOUR OWN DISCOUNT dōTERRA PORTAL.

I do not wish to submit my info. Take me to dōTERRA.

I do not wish to submit my info. Take me to YouTube.

Click the button to go to your own Propur Portal!

AND WE WILL SEND YOU YOUR OWN COPY OF INFORMED CHOICES.

I do not wish to submit my info. Take me to the Free Book.